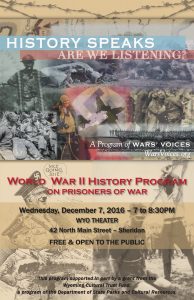 History Speaks – are we listening?

Oral historian Val Burgess will present the program, History Speaks ~ are We Listening? on Wednesday, December 7 at 7PM at the WYO Theater. The program is free and open to the public.

With the loss of thousands of World War II veterans daily in the United States, the personal stories from
this worldwide conflict are quickly disappearing. In this presentation, oral historian, Val Burgess sheds light on the reasons for war, and the human side of the largest war in world history.

Based on 23 years of research and hundreds of interviews with former prisoners of war, Allied Air Crew
members held at Stalag Luft III, “The Great Escape” Camp and from Radio Tokyo Letters from families of prisoners that capitulated in the Pacific, Burgess will discuss their personal experiences and the circumstances under which these men fought and survived. Burgess intertwines the reality of World War II history within the program. She also discusses the depth and complexity the war’s effects on their lives, and the life lessons learned from these prisoners.

The program is free and open to the public.  Wednesday, December 7 at 7:00pm at the WYO Theater.