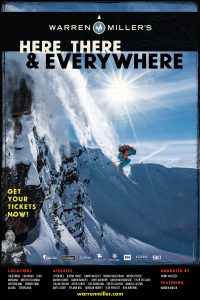 This fall, Warren Miller releases its 67th film, Here, There & Everywhere. The 67th installment brings  the thrill of action snowsports to enthusiasts everywhere, as the world’s most accomplished skiers and snowboarders
scour the globe for untracked powder and the pursuit of adventure. Narration by Olympic gold medalist Jonny  Moseley and on-screen interviews with the legendary Warren Miller deliver the nostalgia of skiing’s roots and a zeal  for discovering new terrain.
Venture with world-renowned athletes JT Holmes, Jeremy Jones, Seth Wescott, Jess McMillan, Ingrid Backstrom,  Marcus Caston, Wendy Fisher, Tyler Ceccanti, Kaylin Richardson and others as they push the boundaries of their  talent on snowcapped peaks, vast glaciers and towering, big-air jumps. Globe-trotting from the U.S. and Canadian  Rockies to sparsely populated lands like Greenland and the Swiss Alps, these skiers and snowboarders prove that the
joy of winter can be found wherever you seek it.
Here, There & Everywhere opens the door to showcase a progressive side of snowsports, from fat biking, backcountry  snowmobiling and hill-climb racing (featuring Polaris pro Keith Curtis) to dogsledding and the ever crowd-pleasing  pond skimming. And, as with every annual tour, the film awakens our desires to hit the slopes and sparks excitement  for the coming winter season.
“This is a special year for Warren Miller Entertainment and the release of our 67th film, Here, There & Everywhere,”  said Managing Director Andy Hawk. “For the first time in a dozen years, we are thrilled to return to the screen with  the support and inclusion of the patriarch of winter stoke, Warren Miller. This year’s project has been an incredibly  rewarding opportunity for the athletes, film crew and staff who were able to work directly with him again.”
The annual, nationwide Warren Miller Film Tour for Here, There & Everywhere kicks off in Salt Lake City, Utah, on  October 14, 2016, and will visit cities across the Pacific Northwest, California, the Rockies, the Southwest, the  Midwest and the East Coast from October 2016 through January 2017. Dates and show times can be found at  warrenmiller.com.
As always, Warren Miller’s annual film signifies the coming of winter and ignites an untamable passion for skiers and riders  everywhere. With the shared energy and comradery found at film screenings, attendees will enjoy exclusive lift ticket deals  from local resorts, offers from local retailers, a chance to win ski vacations and gear from national partners, plus door prizes  and the opportunity to rub elbows with the film’s featured athletes.