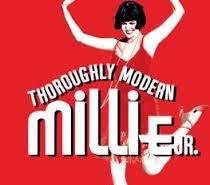 It’s Tandem Productions 22nd season at the WYO Theater and this year audiences will be treated to a local cast of 57 talented young thespians presenting “Thoroughly Modern Millie JR.”.

It’s 1922 in New York City, and a young Millie Dillmount has just moved to the Big Apple in search of a new life. Her grand plan is to find a job as a secretary for a wealthy man and then marry him. However, her plan goes completely awry. Millie’s wealthy boss is slow in proposing marriage, and the man she actually falls in love with doesn’t have a dime to his name – or so he tells her. What’s a small town girl to do?

Filled with fun flappers, dashing leading men and a villainess audiences will love to hate, Thoroughly Modern Millie JR. is a clever adaptation of the six-time-Tony-Award-winning Best Musical and the Academy Award-winning film. You won’t want to miss it!