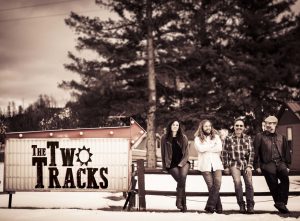 Sheridan Wyoming’s own touring band The Two Tracks are returning to the WYO Theater for their second album release on April 21.  This cello-infused western folk-rock group was voted #1 for their debut album in Wyoming 2016 – WY-NPR.  Their second album was recorded in Nashville, TN, with producer Will Kimbrough at the Butcher Shoppe Studio, where Sturgill Simpson’s newly grammy winning album was produced.  www.thetwotracks.com

“The Two Tracks record rural warmth…infusing their tunes with a feel for the open spaces of The West.” – The Alternate Root