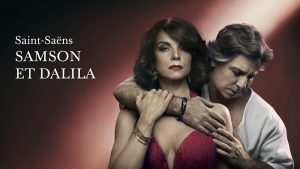 World Premiere: Grand Ducal Theater, Weimar, 1877. The source of this popular opera is a single chapter in the biblical Book of Judges, and the brevity of the tale did nothing to prevent it from becoming one of the world’s great stories of love (or at least passion)—as well as the archetypal depiction of a man betrayed by an immoral woman. Saint-Saëns’s opera, along with other artistic renderings across multiple genres, has had an important role in the popularization of this tale. Despite tepid success early on, Samson et Dalila eventually conquered the operatic world and has proven itself a magnificent evening of theater.

When mezzo-soprano Elīna Garanča and tenor Roberto Alagna joined forces for a new production of Carmen at the Met, the results were electrifying. Now this star duo reunites for another sensual French opera when they open the season in the title roles of Saint-Saëns’s biblical epic Samson et Dalila. Darko Tresnjak, who won a Tony Award for Best Direction of a Musical in 2014 for A Gentleman’s Guide to Love & Murder, makes his Met debut directing a vivid, seductive staging, featuring a monumental setting for the last-act Temple of Dagon, where the hero crushes his Philistine enemies. Sir Mark Elder conducts the first new Met production of the work in 20 years.