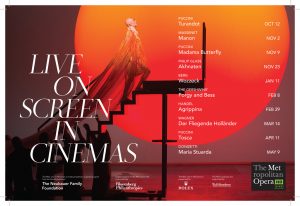 Season tickets will be available through October 14

World premiere: Teatro alla Scala, Milan, 1926. Puccini’s final opera is an epic fairy tale set in a China of legend, loosely based on a play by 18th-century Italian dramatist Carlo Gozzi. Featuring a most unusual score with an astounding and innovative use of chorus and orchestra, it is still recognizably Puccini, bursting with instantly appealing melody. The unenviable task of completing the opera’s final scene upon Puccini’s sudden death was left to the composer Franco Alfano. Conductor Arturo Toscanini oversaw Alfano’s contribution and led the world premiere.
Two of opera’s most thrilling dramatic sopranos, Christine Goerke and Nina Stemme, reprise their fierce portrayals of the title princess. Yannick Nézet-Séguin takes the podium to conduct Franco Zeffirelli’s dazzling production of Puccini’s final masterpiece, which also features tenors Roberto Aronica and Marco Berti as Calàf, sopranos Eleonora Buratto and Hibla Gerzmava as Liù, and bass-baritone James Morris as Timur.

Premiere: Opéra Comique, Paris, 1884. A take on the quintessentially French tale of the beautiful young woman who is incapable of forsaking both love and luxury, Massenet’s Manon features one of the truly unforgettable, irresistible, and archetypal female characters in opera. While the story is firmly set in class and gender issues of the past, the character of Manon herself is timeless, convincing, and familiar. The opera has been a success ever since its premiere, championed by a diverse roster of singers who have cherished its dramatic opportunities, exalted style, and ravishing music.
Exhilarating soprano Lisette Oropesa stars as the irresistible title character, the tragic beauty who yearns for the finer things in life, in Laurent Pelly’s revealing production. Tenor Michael Fabiano is the besotted Chevalier des Grieux, whose desperate love for Manon proves their undoing. Maurizio Benini conducts Massenet’s sensual score.

World premiere: Teatro alla Scala, Milan, 1904. Met premiere: February 11, 1907. The title character of Madama Butterfly—a young Japanese geisha who clings to the belief that her arrangement with a visiting American naval officer is a loving and permanent marriage—is one of the defining roles in opera. The story triggers ideas about cultural and sexual imperialism for people far removed from the opera house, and film, Broadway, and popular culture in general have riffed endlessly on it. The lyric beauty of Puccini’s score, especially the music for the thoroughly believable lead role, has made Butterfly timeless.
Leading sopranos Hui He and Ana María Martínez share the heartbreaking title role of the doomed geisha, with tenors Piero Pretti and Andrea Carè as the American naval officer who abandons her. The great Plácido Domingo makes his role debut as Sharpless, alternating with Paulo Szot and Markus Brück. Pier Giorgio Morandi is on the podium for Anthony Minghella’s sweeping production, a perennial audience favorite.

Director Phelim McDermott tackles another one of Philip Glass’s masterpieces, following the now-legendary Met staging of Satyagraha. Star countertenor Anthony Roth Costanzo is the title pharaoh, the revolutionary ruler who transformed ancient Egypt, with the striking mezzo-soprano J’Nai Bridges in her Met debut as his wife, Nefertiti. To match the opera’s hypnotic, ritualistic music, McDermott has created an arresting vision that includes a virtuosic company of acrobats and jugglers. Karen Kamensek conducts in her Met debut.

World Premiere: Staatsoper, Berlin, 1925. One of the emblematic achievements of the thriving artistic forces in Germany and Austria during the brief period between world wars, Wozzeck was a sensation and a scandal at its premiere. Remarkably, it has lost none of its power to fascinate, shock, and engage audiences, and its status as one of the defining musical works of the 20th century has not blunted its vitality.

One of America’s favorite operas returns to the Met for the first time in nearly 30 years. James Robinson’s stylish production transports audiences to Catfish Row on the Charleston waterfront, vibrant with the music, dancing, emotion, and heartbreak of its inhabitants. “If you’re going to stage Gershwin’s opera, this is how,” raved the Guardian when the new production premiered in London in 2018. David Robertson conducts a dynamic cast, featuring the sympathetic duo of Eric Owens and Angel Blue in the title roles and an all-star ensemble that includes Golda Schultz, Latonia Moore, Denyce Graves, Frederick Ballentine, Alfred Walker, and Ryan Speedo Green.

Handel’s tale of intrigue and impropriety in ancient Rome receives its first Met performances, with star mezzo-soprano Joyce DiDonato as the controlling, power-hungry Agrippina and Harry Bicket conducting. Sir David McVicar’s production ingeniously reframes the action of this black comedy about the abuse of power to “the present,” where it should loudly resonate. The all-star cast features mezzo-soprano Kate Lindsey as Agrippina’s son and future emperor Nerone, soprano Brenda Rae as the seductive Poppea, countertenor Iestyn Davies as the ambitious officer Ottone, and bass Matthew Rose as the weary emperor Claudius.

World premiere: Dresden, Court Opera, 1843. Der Fliegende Holländer is the earliest of Wagner’s operatic creations to remain in the repertory. The two lead roles represent archetypes to which the composer would return, in one form or another, in most of his later works: the “otherworldly stranger” and the woman who sacrifices herself for his salvation. The work’s unearthly ambience is impressive but only one aspect of it: Both the world of nature and of the supernatural are magnificently evoked in the score.
The great bass-baritone Sir Bryn Terfel returns to the company for the first time since 2012, in the title role of the cursed sea captain doomed to sail the open ocean for eternity. Valery Gergiev conducts a new production by François Girard, whose visionary 2013 take on Parsifal set the recent Met standard for Wagner stagings. With sweeping sets by John Macfarlane, Girard’s new production turns the Met stage into a rich, layered tableau reminiscent of a vast oil painting. The gifted German soprano Anja Kampe, in her Met debut, is the devoted Senta, whose selfless love is what the Dutchman seeks, with bass Franz-Josef Selig as her father, Daland, and tenor Sergey Skorokhodov as her deserted former lover, Erik.

Premiere: Teatro Costanzi, Rome, 1900. Puccini’s melodrama about a volatile diva, a sadistic police chief, and an idealistic artist has offended and thrilled audiences for more than a century. Critics, for their part, have often had problems with Tosca’s rather grungy subject matter, the directness and intensity of its score, and the crowd-pleasing dramatic opportunities it provides for its lead roles. But these same aspects have made Tosca one of a handful of iconic works that seem to represent opera in the public imagination. Tosca’s popularity is further secured by a superb and exhilarating dramatic sweep, a driving score of abundant melody and theatrical shrewdness, and a career-defining title role.
Soprano Anna Netrebko, whom the New York Times hailed as “magnificent” when she made her role debut as Tosca in 2018, returns as Puccini’s explosive diva, back by popular demand. Tenors Najmiddin Mavlyanov and Brian Jagde alternate as the idealistic painter Cavaradossi, and baritones George Gagnidze and Michael Volle complete the opera’s fatal love triangle as the sinister Scarpia. Bertrand de Billy conducts Sir David McVicar’s stunning production.

World Premiere: Teatro alla Scala, Milan, 1835. A searingly dramatic setting of Friedrich Schiller’s play about Mary, Queen of Scots, and her political and personal rivalry with Queen Elizabeth I of England, Maria Stuarda had a troubled genesis, despite its musical and theatrical brilliance, and only recently achieved a place in the repertory. These two fearsome rivals embody different perceptions of royalty, which were very much in direct conflict at that moment in time, and the opera’s drama is true to history in a way the facts are not.
Soprano Diana Damrau, following her triumph as Violetta in last season’s new production of Verdi’s La Traviata, stars as the martyred Mary, Queen of Scots, in Donizetti’s bel canto showcase. Star mezzo-soprano Jamie Barton is her imperious rival Queen Elizabeth I, and the silken-voiced tenor Stephen Costello is the noble Earl of Leicester. Maurizio Benini conducts Sir David McVicar’s handsome production.