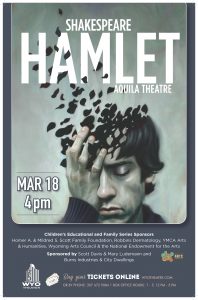 Join the WYO Theater on Sunday, March 18 at 4pm as they present Aquila Theatre’s Hamlet arguably Shakespeare’s greatest play. Written in 1602, it is one of the most complete portrayals of the human psyche that exists in Western Literature. A compelling tale of familial discord, personal ambition, love and revenge, Hamlet has enthralled audiences for 400 years. Mortality and madness are two of the most pronounced themes of Shakespeare’s epic and the characters; Hamlet, Ophelia, Gertrude, and Claudius inhabit a rich landscape replete with deceit, mistrust, and schemes. Four centuries after its premiere, Hamlet continues as one of the classics of the world stage.

Aquila’s productions of Shakespeare have been critically acclaimed by The New Yorker as “beautifully spoken, dramatically revealing and crystalline in effect.” The New York Times says that Aquila “makes Shakespeare perfectly comprehensible” and hails the company as “an extraordinarily inventive and disciplined outfit.”

Directed by Desiree Sanchez, Aquila’s Hamlet will seek to shed new light on this tragic story. The production uses Sanchez’s innovative use of movement, design, sound, and superb acting to vividly explore the depths of rage, madness, love and death brought about by a culture of obsessive personal ambition. D.C. Metro said “Sanchez is wildly inventive, and the production choices made were carried out beautifully” and NY Theater Review says “her direction is polished and laser sharp. She gets the maximum amount of potential out of every stage moment, has exceptional attention to detail, and is a demiurge of direction.”

Don’t miss morality, madness, ambition, love and revenge in Hamlet at the WYO.