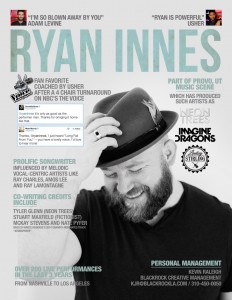 The WYO Theater, in support of Habitat for Humanity’s Fire and Ice Ball,  presents Ryan Innes

Growing up in tiny Thatcher, Arizona, Ryan Innes was raised in the traditional musical environment of a small town. As a youth, he was classically trained on piano and sang in the Phoenix Boys Choir and local church musical groups. But it wasn’t until he was introduced to R&B that Innes began a deep and personal involvement with music that would begin to change his life. In 2013, Innes took a break from his residency at The Montage in Park City, Utah, to try out for NBC’s The Voice. Singing John Mayer’s “Gravity”, Innes quickly received a four-chair turn and picked Usher as his coach. Mentored by Usher and fellow Grammy-winner Pharrell Williams, Innes performed a rendition of Bill Withers’ “Ain’t No Sunshine” in the battle rounds, solidifying his place as a crowd favorite. After The Voice, Innes returned to Utah to focus on writing music. He has co-written with Tyler Glenn of Neon Trees, Stuart Maxfield of Fictionist and McKay Stevens and Nate Pyfer who co-wrote Kaskade’s 2014 Grammy-nominated track “Atmosphere”. In addition to performing over 300 live performances over the past three years, Innes is currently hard at work on his debut album.

Friday, February 5 at 8:00pm – Tickets are $23 per person or $28 which includes a $5 donation to Habitat for Humanity.  Event will be held in the Mars Theater and is general admission.

After party to be held at the No Name Bar on North Main Street.

Sponsored by No Name Bar.