The Rapid Creek Rangers
with
Spurs of the Moment 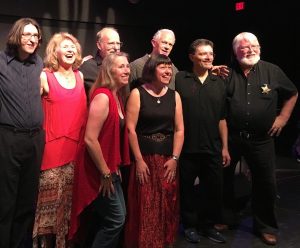 Summertime in Sheridan means lots of celebrating and getting together with friends old and new. It also means that the Rapid Creek Rangers are comin’ to town!In the early 70’s a group of local kids formed a band covering songs made famous in the late 60’s and early 70’s.

Many years have passed, but the friendships forged by that band have remained intact. They came together again years ago from all parts of the country to get reacquainted and make music. This year the Rangers are riding into town again and will perform two shows in the Mars Theater in downtown Sheridan on July 7and 8 at 7:30 p.m. The Rangers combine their talents with local trio, Spurs of the Moment, whose members this year are Tami Davis, former Sheridan resident DeeDee Johnson and former Ranger, Pat Tomsovic. They have also invited Ken Belmont from Lyons, CO and talented drummer and guitarist Jascha Herdt from Laramie to complete the ever-growing band. John Niehay who plays guitar, bass, banjo, and fiddle will be arriving from Decatur, IL, lead guitarist Jerry King will be coming in from his home in Portland, OR and conga player Mark Dixon will arrive from Missoula, MT.

Last year’s concerts were sold out, so the band encourages you to get your tickets early.  All profits from ticket sales will benefit the WYO Theater.

Tickets are $20 per person.

Event to be held in the Mars Theater and is general admission.

Due to the intimate nature of the production and space, we will not offer late seating.