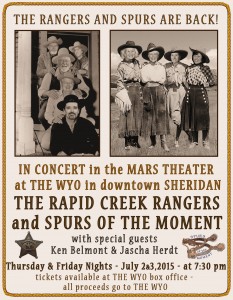 In the early 70’s a group of local kids formed a band covering songs made famous  by musicians,such as the Beatles, James Taylor, Carole King, Joni Mitchell, Cat Stevens, Poco , The Mamas and the Papas,and the Byrds to name a few. They called themselves “The Rapid Creek Rangers” in honor of their conga player’s family ranch.

Many years have passed, but the friendships forged by that band have remained intact. They came together again 4 years ago from all parts of the country to get reacquainted and make music. And they had such a great time they decided to continue to gather here in Sheridan once a week during the summer for a whirlwind session of music making, culminating in a performance. This year the Rangers are riding into town again and will perform two shows in the Mars Theater in downtown Sheridan on July 2 and 3 at 7:30 p.m.

The Rangers combine their talents with local trio Spurs of the Moment whose members are Tami Davis, Nancy Nickelson Phillips and Pat Tomsovic, and have also invited  Ken Belmont from Lyons, CO and Jascha Herdt from Laramie to complete the ever growing band. Former Spur of the Moment singer DeeDee Johnson also is traveling from her new home in Rapid City to join the group. Merle King, the mandolin player now resides in Rome, GA, John Niehay who plays guitar, bass, banjo and fiddle will be arriving from Decatur, IL, lead guitarist Jerry King will be coming in from his home in Portland, OR, and Mark Dixon on congas will drive down from Missoula, MT.

Last year’s concert was sold out, so the band agreed to put on two shows as all profits from ticket sales will benefit the WYO Theater.