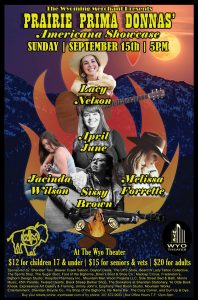 Headliner
Artist Name: Lacy Nelson
Bio: Lacy Nelson was raised in the red foothills of the Big Horn Mountains of Wyoming. She has strong Americana and Country roots, delivering a fresh perspective with poetry, and music, that is shaped by the wild prairie, her family, and life on a cattle ranch, as the daughter of 4th generation ranchers near Ten Sleep, Wyoming. Lacy placed in the 2018 Wyoming Singer- Songwriter competition and is set to perform at multiple music festivals around Montana and Wyoming, performing original songs from her new, self-titled album recorded live in Red Lodge, Montana. Lacy Nelson’s new self-titled album was recorded live at the Roman Theater in Red Lodge, Montana.
Lacy is 22 years old, and was very musical from a young age. She took piano lessons from age 5 through middle school. It was soon obvious that she was more interested in creating her own songs than learning music written by someone else, which led her to spent many hours writing, and playing, at her mother’s piano. Leaving for college meant that she had to leave her piano behind, so Lacy picked up her brother’s guitar and began to teach herself. After graduating from Sheridan College with degrees in Rangeland Management and Agriculture Education, Lacy returned to her family’s ranch where she lived until her recent move to Spearfish, South Dakota. Her professional music career is quickly expanding and providing exciting opportunities. Lacy placed 3rd in the 2018 Wyoming Singer-Songwriter competition with songs that will be featured on a compilation CD from the competition and on her upcoming album.
Genre: Western Folk Country

Co Headliner
Artist Name: Sissy Brown
Bio: Hailing from Oklahoma, Sissy Brown is a sweet voiced, foul mouthed, country singer/songwriter influenced by honky tonk, outlaw, and solid country gold legends. Sissy has played over 250 shows a year, nationwide, but prefers being at home on a big ol’ cattle ranch in Byers, TX.
She has lived all over and played all over. Always ready for anything, she, along with her trusty 6 string guitar, is prepared to sing, and play, Texas Country, Red Dirt, and Solid Country Gold hits. An Ameripolitan Award Nominee 2017, Sissy is not only seasoned, but accomplished as well.
Genre: Country – Honky Tonk

Supporting act #1
Artist Name: Melissa Forrette
Bio: It wasn’t too long ago that, singer-songwriter, Melissa Forrette moved to Montana to work as a wilderness outfitter in the Bob Marshall Wilderness. Not long after that, Melissa decided to forgo a college volleyball scholarship, quit her day job and invest everything she has to further her career in music. The very talented musician from Montana has since spent 7 years building her name, by working tons of shows, and taking advantage of the experienced gained from time on stage. Now, she is fresh off a very successful stint in Nashville, and ready to perform her own style of country music for the masses.
Genre: Country

Supporting act #2
Artist Name: April June
Bio: April June is a singer-songwriter from Story, Wyoming. In true Americana style, think Bob Dylan, but with a wonderful voice, she blows folks away with her skill on the acoustic and/or electric guitar. Then she brings it all home with her before mentioned “wonderful voice”. All together it makes for a performance you won’t soon forgot.
Genre: Rock and Roll-Blues-Americana

Supporting act #3
Artist Name: Jacinda Wilson
Bio: Jacinda Wilson is a musician with a degree in Music Education from the University of Nebraska at Kearney, and teaching certification in both Nebraska and Wyoming. She is currently living in the Dubois, and performing around Wyoming. She primarily teaches and plays flute, voice, and piano, but is not limited in the instruments she can utilize. Jacinda has been performing since a young age, on both piano, her voice, and on flute since middle school. She is also self-taught on guitar, and can accompany herself, or sing with other musicians. She occasionally writes music as well, and is generally well-versed in multiple genres of the performing arts.
Genre: Americana-Classical-Gospel