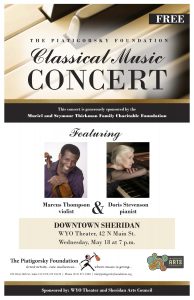 THE PIATIGORSKY FOUNDATION FOCUSES ON
ARTISTIC EXCELLENCE AND PUBLIC OUTREACH

For over 25 years, The Piatigorsky Foundation’s commitment to artistic excellence and public outreach has fascinated many avid concert goers as well as curious first-timers. It is this combination of complimentary access, flamboyant performances, and human warmth that makes Piatigorsky Foundation concerts so appealing to diverse audiences. For the thirteenth consecutive year, The Muriel & Seymour Thickman Family Charitable Trust is funding The Piatigorsky Foundation’s tour of Wyoming. In an effort to serve more communities, two tours will once again be presented in the state. The Spring tour, beginning in Sheridan on May 17th and concluding on May 23rd in Pine Bluffs, will include public concerts and school outreach programs. The Wyoming Arts Council has served as the facilitator with each of the 16 communities throughout the state.

MARCUS THOMPSON has appeared as viola soloist, recitalist and chamber music player in series throughout the Americas, Europe and the Far East. He was featured as soloist with the Symphony Orchestras of Atlanta, Chicago, Cleveland, Philadelphia, Saint Louis, and the Czech National Symphony. He has recorded the Bartok Viola Concerto and the Bloch Suite with the Slovenian Radio Symphony and the Tibor Serly Concerto, Jongen Suite and Francaix Rhapsodie with the Czech National Symphony, both conducted by Paul Freeman. He has been a guest of the Audubon, Borromeo, Cleveland, Emerson, Jupiter, Muir, Orion, Shanghai, and Miami String Quartets; the Chamber Music Society of Lincoln Center; and a frequent participant in chamber music festivals in Amsterdam, Anchorage, Dubrovnik, Montreal, Seattle, Sitka, Los Angeles, Okinawa, Portland and Vail. Mr. Thompson, who is in his sixth season as Artistic Director of the Boston Chamber Music Society, earned a doctorate degree at The Juilliard School following studies with Walter Trampler. He is an alumnus of Young Concert Artists, Inc. Born and raised in The Bronx, N.Y.C., he currently lives in Boston where he founded and leads programs in chamber music and performance study at MIT as Institute Professor, and serves on the viola faculty at New England Conservatory of Music.

Pianist DORIS STEVENSON has won lavish praise from critics and the public alike for her solo and collaborative performances. She has soloed with the Boston Pops, played at Carnegie Hall in New York, the Kennedy Center in Washington D.C., Salle Pleyel in Paris and Suntory Hall in Tokyo. In addition, Stevenson has performed with the leading lights in string playing such as Gregor Piatigorsky, Ruggiero Ricci and Paul Tortelier. Early in her career, she was invited by Heifetz and Piatigorsky to perform with them together. Stevenson is a founding member of the Sitka Summer Music Festival in Alaska, and has participated in numerous chamber music festivals throughout the United States.