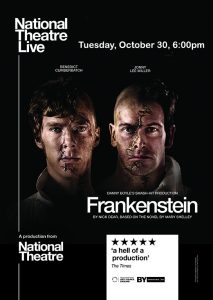 Frankenstein returns to international cinemas this Halloween, to mark the 200th anniversary of Mary Shelley’s most famous novel.

Captured live in 2011 from the National Theatre stage in London, this thrilling, sold-out production became an international sensation, experienced by almost half a million people in cinemas around the world.