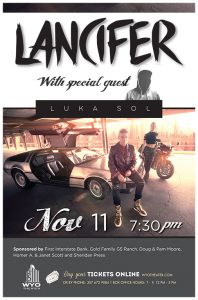 From Hollywood to North Korea, Christian stuntman vigilante of a self-produced pop artist Lancifer has broken the idea of what an independent artist looks like. Grinding his way up from homeless to playing 15,000 person arenas in Germany, he has done it all, and for the right reasons. Proving to represent the actuality of a real Christian, he has not missed his opportunity to serve both his fans in America, all the way to being on the ground providing charity and aid in situations like the Nepal earthquake. Other notable mentions include his recent album “Foreign” and performing in 46 cities in 50 days with Metro Station. With a live show that feels like a movie including smashing glass bottles, front flips, dance choreo and even his wife/Dj breathing fire, Lancifer is making a statement that should be paid attention to. For crazy tour footage and 20+ music videos shot in over 15 countries, check out Youtube.com/Lancifer