Julian Sands in
A Celebration of Harold Pinter 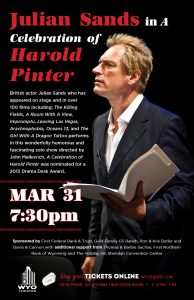 In 2005, Julian Sands was approached by the Nobel Prize winning playwright and poet Harold Pinter, to prepare a selection of his poems for a special presentation in London. Pinter “apprenticed” Mr. Sands, spending hours sharing his thoughts on how his work should be delivered. Every pause, every nuance in tone, had, and has meaning. A bond was established between these two artists- one that gives a distinctive and very personal voice to Pinter’s words. This extraordinary collaboration became the foundation for a wonderfully rich, humorous, and fascinating solo show directed by John Malkovich- A Celebration of Harold Pinter.
Performances at the Edinburgh Festival in 2011 and in New York at The Irish Repertory Theatre in 2012 were followed by engagements at Steppenwolf in Chicago, Herbst Theatre in San Francisco as well as in Los Angeles, Mexico City, Budapest, London, and Paris.
This is an evening of Homeric theater with an extraordinary actor, great words, and an audience. Devoid of pretension or glittery trappings, A Celebration of Harold Pinter gets to the soul of the man- poet, playwright, husband, political activist, Nobel winner, mortal. A Celebration of Harold Pinter was nominated for a 2013 Drama Desk Award.