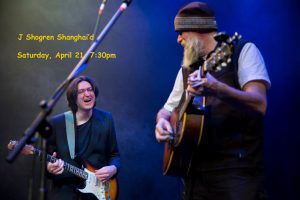 J Shogren Shanghai’d from Centennial WY (pop 100, 4 bars) have a singular vision of what they are doing musically—Roots & folk music filtered through a contemporary dissonant transmitter.

Growing up in Northern Minnesota, Shogren’s backstory is kinda wild…musician trapper economist janitor who worked for the King of Sweden and President Clinton…and writes songs about Salvation and Lutefisk.

Shogren calls their music “catawampus american music”. He shows up with a lived-in rasp of a voice, acoustic guitars, a mandolin and a batch of his own songs and some well-traveled numbers by cohorts from another time. Shogren has released numerous albums over the last decade, played all over the Rocky Mtn region & Europe, and International Blues Challenge in Memphis. Shogren played the Lincoln Center in NYC and the Kennedy Center in Wash DC (with Max Hatt & Edda Glass), as part of the NewSong Music Series.

“J Shogren is an intellectual dealing in pop music. He’s funny, but the jokes are wry and subtle, drawn from a wide range of high and low cultural references….Like traditional music itself, Shogren’s songs occupy their own other world.” J Clark (US) Rambles

“Increasingly so, those artists who stand out among the many entrants each year to the NewSong Competition possess not only great skill as songwriters and performers, but who do so in a way that’s uniquely their own. J Shogren is no exception. His songwriting is endearingly eclectic. And he delivers his songs with a confidence and enthusiasm characteristic of all the great ones who truly understand their craft.” Gar Ragland, Producer & Director, NewSong Music

“Shogren’s style is definitely singular. Whether solo, duo or with a larger ensemble, Shogren is like the distant, Wyoming-born