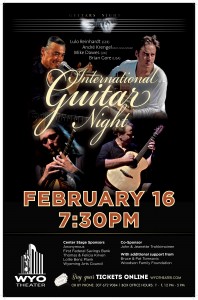 THE INTERNATIONAL GUITAR NIGHT (IGN) is the world’s premier touring guitar festival, each show bringing together the most interesting and innovative acoustic guitarists to exchange musical ideas in a public concert setting. For each tour, IGN founder Brian Gore invites a new cast of guitar luminaries to join him for special evenings of solos, duets, and quartets that highlight the dexterity and diversity within the world of acoustic guitar. Brian founded IGN in 1995 as a forum for the world’s finest guitarists/composers to play their latest original songs and share musical ideas and talent with their peers. This year IGN’s North American tour features Lulo Reinhardt, Mike Dawes, Andre Krengel, and Brian Gore.

Shows in Europe have been recorded and used for a live album release in the United States. IGN founder Brian Gore will be joined by three of Europe’s finest acoustic guitarists: Gypsy Jazz legend Lulo Reinhardt, contemporary fingerstyle innovator Mike Dawes and multi-genre showman Andre Krengel. Lulo has expanded on the legacy of his grand-uncle Django with Latin-flavored rhythms and melodies. Mike’s lightning-speed and deft tapping and percussion were among the highlights of the 2014 IGN tour. Andre is a master of many styles from flamenco to swing to modern ballads and he is a frequent collaborator with Lulo in Germany. We are looking forward to a particularly dynamic evening of contemporary guitar music.