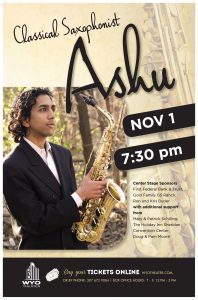 The young concert saxophonist Ashu has established an extraordinary ability to communicate with audiences through his charismatic and emotive performance style. He has defied conventions winning major  international awards and competitions traditionally won by pianists and violinists. While his astonishing virtuosity thrills listeners, his artistry reaches far beyond this demonstrating a unique personality and musical voice. Critics have described him as “just as much fun to watch as to  listen to” (Dallas Morning News) and “ready to cultivate the masses” (Chicago Tribune).

Born and raised in California, Ashu began playing the saxophone at age 10. After just a few years, he began entering competitions and found himself receiving a wide range of opportunities, including his recital debut, which took place at Carnegie Hall. Since then he has performed throughout the world. Ashu’s concerto appearances last year included prominent halls throughout Russia, South Africa, Great Britain, Finland, Poland, Estonia, New Zealand, Bulgaria, Kyrgyzstan, Azerbaijan, Canada, and the USA. Other recent solo tours have taken him throughout Vienna, Lisbon, Munich, France, Switzerland, Norway, and the French West Indies.

While most audiences have never heard the saxophone in concert music, Ashu has begun to change this. With a dynamic style that captivates general as well as classical audiences, he has shown that the concert saxophone can reach beyond stylistic categorization and to a large diversity of people.
With an engaging personality, Ashu has been featured on NBC, CBS, NPR, and numerous other live TV and radio broadcasts. He received his Bachelor and Masters of Music degrees from Northwestern University under the guidance of renowned saxophone teacher Frederick Hemke, and he is currently based in the Chicago area.