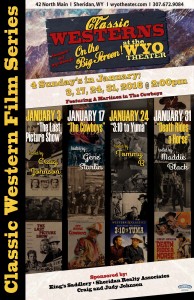 The western movies return to The WYO Theater on Sunday’s in January!

January 17 – The Cowboys hosted by Gene Sturlin. Rancher Wil Andersen is forced to take on a collection of young boys as his drivers in order to get his herd to market in time to avoid financial disaster. The boys learn to do a man’s job under Andersen’s tutelage; however, neither Andersen nor the boys know that a gang of cattle thieves is stalking them. Starring John Wayne and Bruce Dern.

January 24 – 3:10 to Yuma hosted by Tommy B. Broke small-time rancher Dan Evans is hired by the stagecoach line to put big-time captured outlaw leader Ben Wade on the 3:10 train to Yuma but Wade’s gang tries to free him. Starring Glenn Ford and Van Heflin.

January 31 – Death Rides a Horse hosted by Maddie Black. In the Old West a little boy witnesses the murder of his family by gunmen and grows up with plans to track them all down. Starring Lee Van Cleef and John Phillip Law.