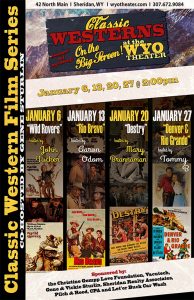 The Classic Western Film Series is back at the WYO! Each film features a guest host, prize giveaways, free popcorn and a sense of nostalgia. Started in 2010 by then board member Gene Sturlin and now board chair, each film is introduced by Mr. Sturlin and a guest host who touches on highlights, lowlights and funny anecdotes from the film. The lineup this year includes Wild Rovers starring William Holden, Ryan O’Neal and Karl Malden on January 6; John Wayne’s classic Rio Bravo with Dean Martin and Ricky Nelson January 13; Destry which hatched the TV show of the same name and the sequel, Destry Rides Again, January 20 and rousing locomotor Denver & Rio Grande January 27.

All films are at 2pm, four Sundays in January. Start your new year with the classics!

Rio Bravo – A small-town sheriff in the American West enlists the help of a cripple, a drunk, and a young gunfighter in his efforts to hold in jail the brother of the local bad guy. Starring John Wayne, Dean Martin and Ricky Nelson. Guest host: Aaron Odom. Run time: 2:21.