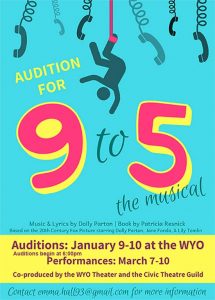 Dolly Parton’s “9 to 5 the Musical” is coming to Sheridan! Co-produced by The WYO Theater and the Civic Theatre Guild, you are cordially invited to audition for this fun, energetic, empowering production at 6:00pm on January 9 and 10, 2019 at the WYO Theater. Performance dates are March 7-10, 2019.

With music and lyrics by Dolly Parton and book by Patricia Resnick, “9 to 5 the Musical” is based on the 1980 seminal hit movie of the same name. Set in the late 1970s, this hilarious story of friendship and revenge in the Rolodex era is outrageous, thought-provoking and even a little romantic.

“9 to 5 the Musical” calls for a large cast of enthusiastic actors, singers, and dancers. Whether you’re a seasoned theatre pro or new to showbiz, this community production is sure to be a great time! Auditions will include singing, acting, and movement. You do not need to prepare your own song or monologue; music and excerpts from the script will be provided. The production will be directed by Emma Hall with vocals directed by Amanda Patterson and choreographed by Aunie Johnson. Check out the casting information below!

Pushed to the boiling point, three female coworkers concoct a plan to get even with Franklin Hart, the sexist, egotistical, lying, hypocritical bigot they call their boss. In a hilarious turn of events, Violet, Judy and Doralee live out their wildest fantasy – giving their boss the boot! While Hart remains “otherwise engaged,” the women give their workplace a dream makeover, taking control of the company that had always kept them down. Hey, a girl can scheme, can’t she?

Violet Newstead
The company’s Head Secretary. she is a single mother who stands up for what she believes in. Strong, ambitious, and done with being overlooked.
Age: 35 to 50
Vocal range: F3-D5

Doralee Rhodes
A young, sexy spitfire who works at Mr. Hart’s office. She is a lot more than just her looks!
Age: 20 to 30
Vocal range: G3- E5

Judy Bernly
The new girl at the firm. She has been burned by her husband’s affair and is searching for personal empowerment. Insecure, determined, and hopeful.
Age: 20 to 35
Vocal range: Ab3-F5

Franklin Hart
The firm top executive and a notorious chauvinist. He is capable of faking charm but usually shows his true colors as an arrogant, self-absorbed boss.
Age: 45 to 55
Vocal range: C3-Gb4

Roz Keith
Mr. Hart’s attentive Administrative Assistant: the snitching queen of office gossip. She has an unrequited love for Mr. Hart and will do anything she can to win his approval.
Age: 35 to 55
Vocal range: G3-C5

Dwayne
Doralee’s husband. He is very supportive of her professional pursuits.
Age: 25 to 35
Vocal range: E2-G4

Maria
A young and vibrant secretary in Hart’s office.
Age: 20-30

Dick
Judy’s soon-to-be ex-husband. An average guy, he is sporting a little less hair and a little more paunch than he did ten years ago.
Age: 35 to 45

Kathy
A secretary in Hart’s office with a tendency to gossip.
Age: Flexible

Margaret
A secretary in Hart’s office with a tendency to drink.
Age: Flexible

Tinsworthy
Franklin Hart’s boss and Chairman of the Board. A good man, who may be wiser to Hart’s ways than he lets on.
Age: 50 to 65