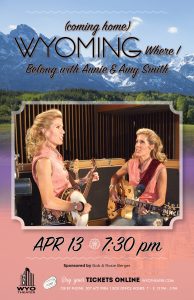 Annie & Amy, 5th generation Wyoming Natives and professional songwriters will be performing at the WYO Theater featuring their award winning song, “Wyoming Where I Belong”.
Annie & Amy toured the world as Nashville Recording artists for Warner Bros. Records. They performed on Cruise Ships and for service men and women headlining on USO Tours and shared the stage with Bob Hope as well as with Trisha Yearwood, Garth Brooks, Faith Hill and Toby Keith. They also performed for US Presidents, including President Reagan; and for Dignitaries and Ambassadors to the Vatican and Austria and for celebrities such as Clint Eastwood, Jimmy Stewart and Robert Redford. These Wyoming twins performed on the Grand Ole Opry as guests of Roy Acuff the King of Country Music. While living in Los Angeles, Annie & Amy were featured on National Television Commercials such as McDonalds, Heineken and Microsoft and appeared on several national television interview programs.
“Wyoming Where I Belong” debuted in New York’s Central Park and on ABC’s Good Morning America. The song recently received an International Music Award for its contribution to American Culture and Western Heritage and featured on PBS Television. “Wyoming Where I Belong” is actually heard around the world played on BBC Radio in England, Ireland, Scotland, Czech Republic, Turkey, & Greece. Now the song is coming home to Wyoming.
Come join Annie & Amy who will be playing some of their new songs from their latest Nashville recordings from their CD; “Coming Home Wyoming Where I Belong”.