A Man and his Prostate starring Ed Asner 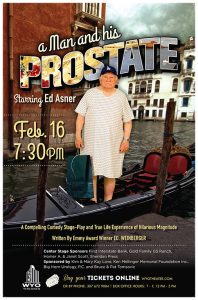 “A Man and His Prostate” was created and written by award-winning Ed Weinberger, who has been showered with EMMYS (9) and Golden Globes (3) and has earned a Peabody Award. Weinberger wrote for Bob Hope, The Tonight Show Starring Johnny Carson, The Dean Martin Comedy Hour, Taxi, and the Bill Cosby Show for eight seasons.

“A Man and His Prostate” is based on Ed Weinberger’s true life experience while vacationing In Italy, and being rushed to a hospital for prostate cancer surgery. Media Critics have referred to the stage-play as a “Hilarious” evening of entertainment.

According to Weinberger, Asner was born to play this role of an old codger who won’t take any of life’s injustices sitting down, as he prepares himself for surgery.