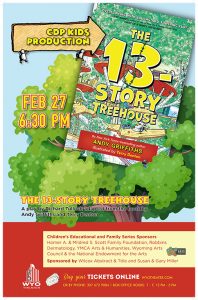 The 13-Story Treehouse is based on the no. 1 international bestselling multi-award winning book and book series by Andy Griffiths and Terry Denton.

Who wouldn’t want to live in a Treehouse?

Especially a 13-Story Treehouse that has everything; a bowling alley, a secret underground laboratory, self-making beds, a vegetable vaporizer and a marshmallow machine for starters.

Andy and Terry live there, make stories together, and have a series of completely nutty adventures. Today’s the day they’re going to bring those stories to the stage in their first play – except they forgot to write it! They have arrived to take part in what they think is a rehearsal only to find that they are a week late and now have an audience to entertain and a show to put on! And where will they find flying cats, a mermaid, a sea monster, an invasion of monkeys and a giant gorilla?
This is a riotous rollercoaster of a show that uses live action, puppetry, songs, music and animation to spark the imagination, inspiring young people aged 6-12 to discover the joy ofreading and theatre – particularly boys – so often a difficult group to get reading.  The 13-Story Treehouse is brought to life by a seriously funny cast and magical moments of theatrical wizardry.