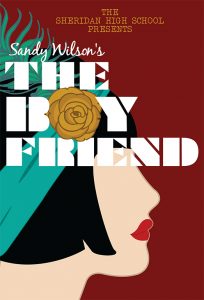 Get ready for a jazz-inspired musical comedy, The Boy Friend taking the stage March 1st through the 4th in the Sue Henry Auditorium at Sheridan High School. Sandy Wilson’s The Boy Friend is set in the French Riviera of the frolicking 1920’s. This three act musical is bound to entertain both young and old alike with its romantic (and comedic) escapades.

The Boy Friend tells the story of English heiress, Polly, who is longing for only one thing: a boy friend. She thinks she has found it in a messenger boy named Tony, but neither of them are who they pretend to be. This is just the tip of the mistaken identity iceberg. Love proceeds to find its way charmingly through nearly every member of the cast, young and old, and even rekindles a flame from the past.

Special thanks to our sponsors, Sheridan Media, The Business Center and Craftco Metals Services