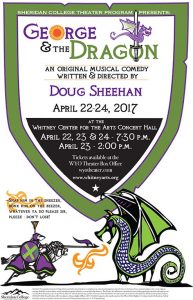 The Whitney Center for the Arts at Sheridan College Concert Hall is proud to host The Sheridan College Theater Department spring musical, George and the Dragon, written and directed by Big Horn resident Doug Sheehan April 22-24.

This will be the second play written by Sheehan to be performed at Sheridan College. The first was an original piece created for the Big West Art’s Festival, performed in the summer of 2008.

“This production is a hilarious and touching celebration of one of mankind’s oldest and most beloved Fables, performed as a Musical for the whole family,” said director Doug Sheehan.

The performances will be held Saturday, April 22 through Monday, April 24 at the Whitney Center for the Arts at Sheridan College concert hall at 7:30pm. There will be a special matinee performance at 2:00 p.m. Sunday.

Recommended age is junior high and older.  For more information about the production, contact Sheridan College at (307) 674-6446.